John Dwyer of Thee Oh Sees is, possibly, one the most prolific person on Earth.
When not on tour (but when ?!), he releases several albums with his band Thee Oh Sees, or with his solo project Damaged Bug,
He runs his label, Castle Face
And makes art.

The posters and flyers he made over the years are now compiled into a book, Exploded Globes, that will be out in March.
Sneak peek below. 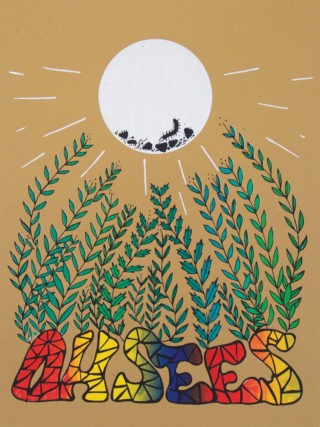 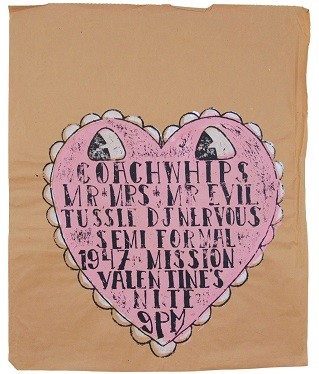 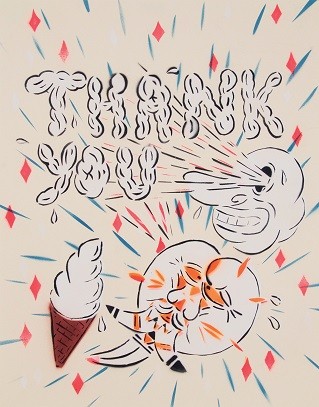 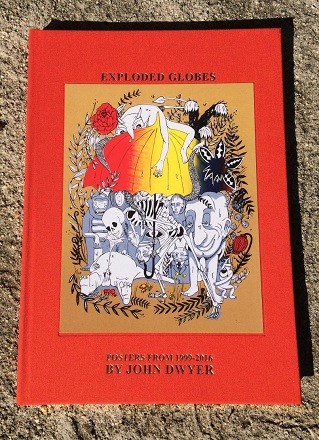 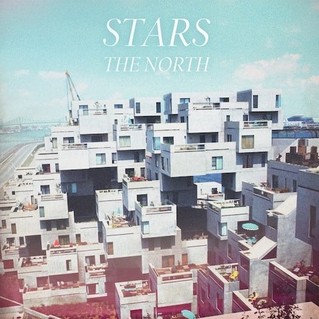 Designed by Moshe Safdie along the Saint Lawrence River in Montreal, Habitat 67 is an experimental modular housing.
The project was his thesis project for his studies. Two years after starting out a job at Louis Kahn’s office, his former thesis advisor Sandy Van Ginkel, also in charge of the master plan for Expo 67, approached him to propose his plans as one of the World’s Fair pavilion.
The building, now considered as a Brutalist landmark in Canada, comprises 345 prefabricated concrete forms put together in various combinations. These units form 158 residences of different sizes and configurations. Saftie’s goal was to combine the advantages of suburban housing with modernity.
For their 6th album released in 2012, The North, the Montreal band Stars chose an aerial view of the complex. 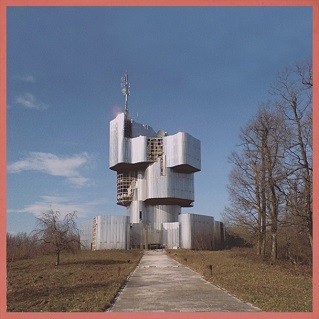 Located on Petrova Gora, a Croatian mountain range, the monument, designed and built in 1981 by Vojin Bakic, is a memorial for Serbian resistants who died attacking the Ustase militia at the top of the mountain in 1942. Made of concrete and stainless steel, the monument looks like a stretched Guggenheim. However, the building, originally a museum and now under no protection, is in a state of disrepair but remains a souvenir of the futuristic Soviet-era.
The American-Kiwi band Unknown Mortal Orchestra chose a picture of the building as their 1st album cover. On an interview, frontman Ruban Nielson said it was his desktop wallpaper while making the record, and the futuristic look of it seemed to be the visual equivalent of what he wanted people to hear when they listened to the album. 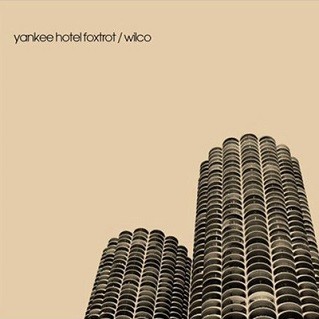 Icon of the Chicago skyline, the two concrete towers designed by Bertrand Goldberg were – at the time of the project’s completion in 1964, the world’s tallest residential building.
Marina City was an urban experiment designed to draw middle-class Chicagoans back to the city after a suburban migration after WWII.
These towers – inspired by Ludwig Mies van Rohe’s Modernst principles - included all the advantages of the suburbs (a couple of stories of parking, restaurants, gym…) into city amenities.
The Chicago band Wilco chose the towers as the cover of their fourth album, Yankee Hotel Foxtrot, released in 2001. This album was a turning point for the band, and some people even renamed the buildings as the Wilco towers. 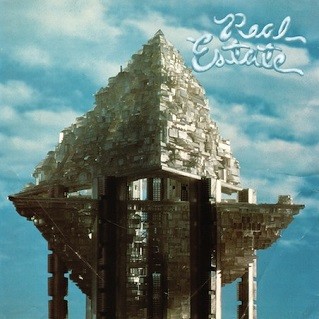 Italian architect Paolo Soleri made a long-life commitment to research and experimentation in urban planning. In the 50’s, he built Arcosanti, in the middle of the desert in Arizona – a laboratory and community for architect students to test his theories and his concept of “arcology” : an architecture taking care of ecology.
The NJ band Real Estate picked up the model for “Hexahedron City”, from the 1969 book Arcology : The City in the Image of Man, as their 1st self-titled album’s cover.
Creating drawings of gigantic urbanizations, Hexahedron was his radical response to the inefficiency of conventional cities. The structure is in the shape of two inverted pyramids incorporated passive solar technologies generating energy and reducing dependency on resources. 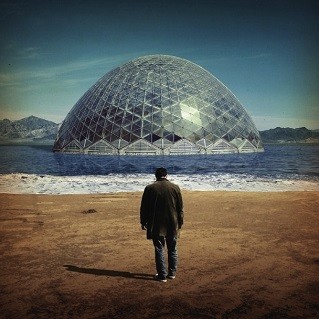 Richard Buckminster Fuller is one of the figures of the counter-culture architect movement in the 60’s and 70’s in North America. Fascinated by the utopia of a new society based on the idea of community, Buckminster Fuller was a symbol for the American youth. His visionary work had an ecologic purpose and his most iconic construction is the geodesic dome – emblem of the hippie housing.
American songwriter Damien Jurado saw many elements in the geodesic dome as symbols (from his utopian philosophy to the silver structure of the building) in his album to choose it as an album cover for his 11th album Brothers and Sisters of the Eternal Son.

ON THE ROAD AND BEYOND

“On the road and beyond” is an ongoing project curated by Barcelona-based photographer Helene Peruzzaro. But don’t be mistaken, the pictures are not taken by her, but by musicians and artists documenting their life on tour. Each edition features works by a selected artist – to whom she has sent disposable cameras. On a quick chat we had with Helene, she explained us all the 'behind-the-scenes' of this awesome project. 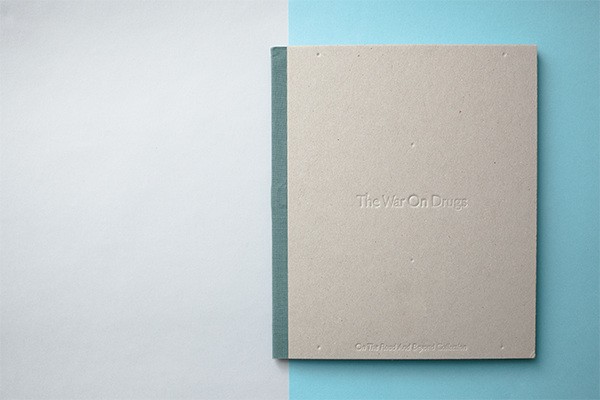 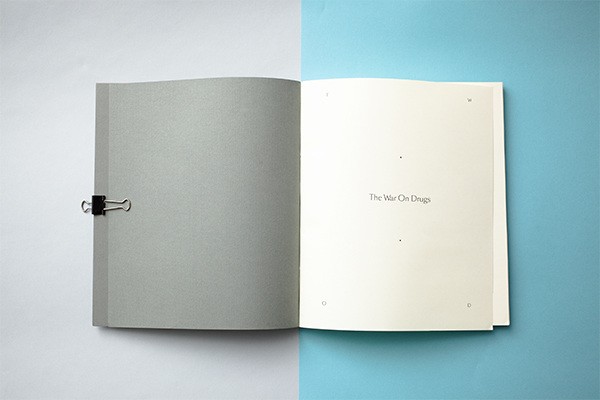 How and when did you come up with this idea ?

After taking many long solo road trips and documenting them with my camera, I became interested in investigating an alternative form of traveling: touring. Combining my passion for expeditions and journeys with my love of the music scene, I came up with the idea of creating a photographic document involving the bands directly by giving them disposable cameras. Since the genesis of this idea, I wanted to create a book collection showing different travelling stories which allowed me also to explore different way of book making, each book will be in a different shape/layout.
Basically this project brings together all my favorite interests : travelling, music, photography, image narration, book publishing. This project is really important to me.

As a photographer, would you like to be on tour with a band and keep a photographic travel diary ?

That would be my dream ! I'd love to live an experience like that and to document it !
Maybe one day... Chaque chose en son temps. 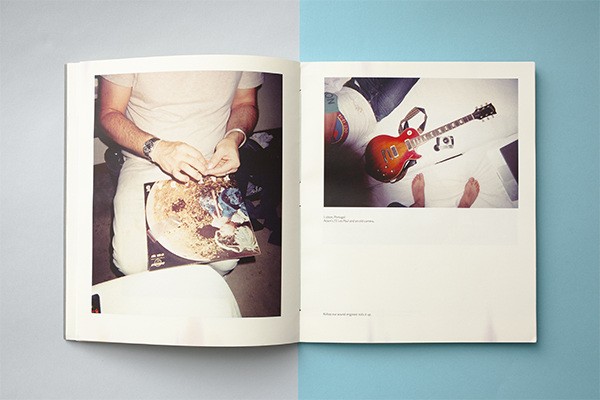 Technically, how do you work ?

As soon as I have the cameras back, I develop and print the films, then I digitalise it.
I try to not photoshop the pics - for the first book I only reframed one pic.
Then I talk with the band to get more information about the pictures in order to help me to build a narration. I work on the layout with my brilliant friend Romain Albertini, who lives in Montreal.
Besides being talented, he gives me a lot of good advice, and opened my eyes on the infinite possibilities you have in book making.
While we work on the layout, I'm hunting for the perfect paper, I am kind of paper psycho, I can spend hours looking, smelling or touching paper.
For this book, I choose a paper called Elaya, it's pretty thick (120gr), I'm totally in love with its texture and color.
Then comes the most complicated part which is to find a good printer and a good bookbinder.
After several attempts I found two old guys who owned one of the most antique printers in Barcelona, they were super excited about the project and it was super nice to talk and work with them.
Then I found an old lady for the binding. She is extraordinary, she hand sews the binding using traditional method, it's pretty amazing to see her at work. 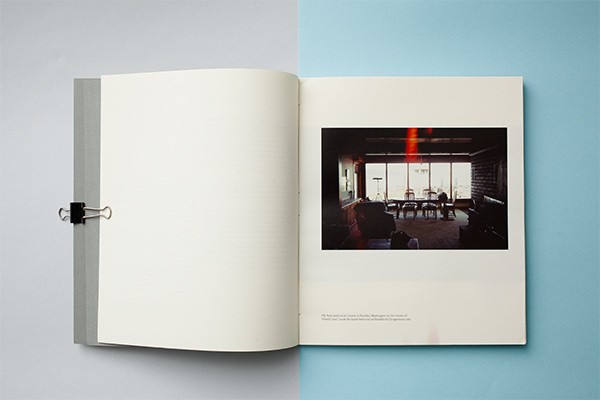 Do you give any advices or policies ?

Not really. I only gave some tips about the cameras, even if it's disposable cameras they still have some specifications and limits etc but beside that, the bands are completely free.
I'm not looking for technically perfect pictures, with the best exposure, rule of thirds etc I am absolutely not interested in that.

For this first book, why do you choose to team with Dave Hartley from The War on Drugs ?

I met the band back in 2011 and remained in contact with them, meeting up while they are on tour or at festivals.
Both Dave and Adam are interested in photography, they own several cameras and they have a good "eye".
I am a big fan of their music, I find it very visual in a way. It was natural that I asked him - he was nice enough to accept.
He recently confessed to me that he always brings disposable cameras on tour since this project - which is pretty cool. 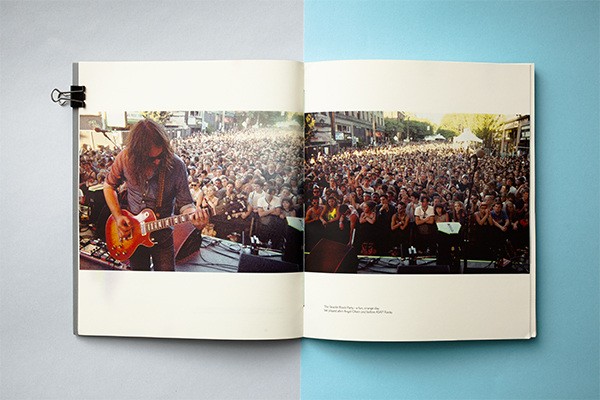 Yes, the second book will be with the band Destroyer. They have released one of my favorite records ever, Kaputt.
A couple of years ago, I met them for the first time when they were touring Europe supporting this record.
They just released a new album, Poison Season, and they are currently touring in the States and will be in Europe next month.
They already have the cameras and I'm going to see them next month in Copenhagen. I can't wait to see them and get the cameras back !

Catch Kevin Morby with his band touring Europe these days: 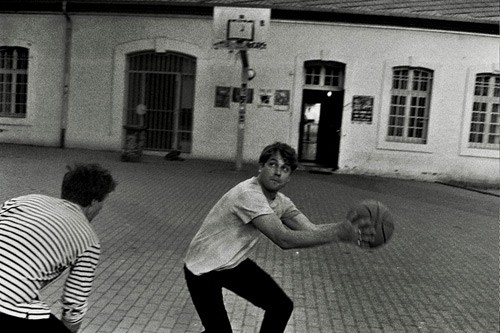 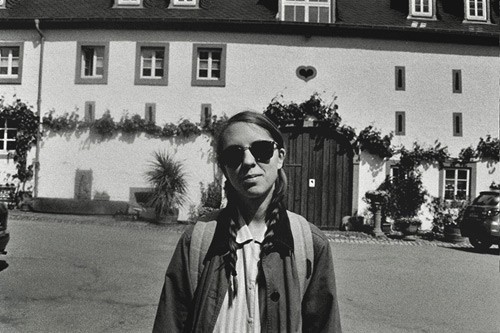